I would give zero. Fare was $22.44 plus $1.00 trunk space luggage fee. I added $3.52 (15%) tip, then the driver did not say any thank you but just quietly opened the trunk so I took the luggage out myself. What is the exact point for the tip? Maybe he would be happy if I gave him $100. If any action requires excessive amount of money to be taken by this driver, maybe I should not have closed the car door or the trunk cover because I was not paid for a penny by the driver to do that.

If I could give them zero I would. Save yourself the hassle and frustration. Especially if you are d

If I could give them zero I would. Save yourself the hassle and frustration. Especially if you are dealing with cab number 45.

Tertible. Blue top 40 at Ron Reagan at 1800/16 Dec 16 was very unprofessional. I told him I was going to Crystal City, a short trip, upon which he said it was bad for him. I complained to MWAA supervisor and took another cab. Called Blue Top and asked to speak to a manager and was told no one is in until Monday.

I'm really appreciate this campny b/c all the time I use cab driver are experience they know how they're drive,traffic situation &exat plss.

The taxi service under this company is called "Blue Top Cab" and the cars are white Toyota Prius. Av

The taxi service under this company is called "Blue Top Cab" and the cars are white Toyota Prius. Avoid them! I had a very dishonest driver. While I was in the taxi, I pulled up Maps on my iPhone and saw that the driver rerouted 2 times to get more money out of me, I assume. The first time it happened, I thought the driver knew a better route and let it go, then I saw the driver ignoring his own GPS maps. My husband, who was tracking me with Find Friends, texted me while I was in the taxi and said that the taxi was way off course and that I had gone past my stop. I ended up telling the taxi driver where to turn using the Maps on my iPhone. It's a horrible feeling to be taken advantage of in this manner. Plus, you feel vulnerable because someone is in control of where you are going. I will never use this taxi service again. 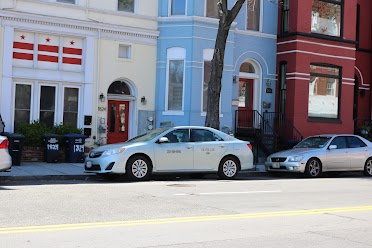